Kings of the Turf

Why a book on the history of the A.J.C. Derby?  Well, why not?  Yesterday, when I was young, and first became interested in the noble sport of horseracing, I devoured all of the books on the history of the Australian Turf upon which I could get my hands.  Alas, the supply was sparse. Unlike most other sports in Australia, cricket and football come to mind, the Australian Turf had been poorly served over the years regarding literature.  Oh, back then in the 1960s and 1970s there were good works by occasional writers on specific races or horses.  Maurice Cavanough and Meurig Davies’s “Cup day: the story of the Melbourne Cup” and Cavanough’s “The Caulfield Cup” are cases in point.  Each book was published upon the centenary of each race, i.e. 1960 and 1976 respectively, and afforded a tantalising yet superficial glimpse into the past, necessarily limited by cost constraints and the difficulties of the respective publishing bodies, F. W. Cheshire and the Victoria Amateur Turf Club.  Isabel Carter’s “Phar Lap – The Story of the Big Horse” (1964) left me thirsting for more.  These books were supplemented, of course, by racing magazines such as Sports Novel, Racetrack, Turf Monthly, and Australian Thoroughbreds.  There was a smattering of earlier books although mostly lightweight stuff such as Nat Gould’s “On and Off the Turf in Australia” (1895) and Clive Inglis’s “Horsesense” and “More Horsesense” (published 1950 and 1959).

In the decade of the 1990s and beyond many more informative books on Australian horseracing have appeared as publishing became cheaper and more widely available through independent publishing houses.  The trickle became a flood.  Good recent examples include “Wenona Girl – The Forgotten Champion” by Graham Caves; “The Master’s Touch – Racing with Etienne de Mestre” by Keith Patterson; “Heroes and Champions” by Bob Charley; “Tulloch – A Mighty Champion” by Ken Linnett; and the absolutely splendid “Horsemen of the First Frontier (1788-1900)” by Keith Binney. However, there is still no book exclusively focussed on the Australian Jockey Club and its classic race, the AJC Derby.  No other horse race in Australia can boast the quality of winners on its honour roll from such an early date, 1861, until its last spring running in 1977.  How’s this for a list of great Australian gallopers during these years: Yattendon, The Barb, Florence, Richmond, Robinson Crusoe, Nellie, Grand Flaneur, Navigator, Le Grand, Trident, Abercorn, Camoola, Amberite, Maltster, Noctuiform, Poseidon, Mountain King, Prince Foote, Cetigne, Biplane, Gloaming, Artilleryman, Rivoli, Ballymena, Heroic, Manfred, Rampion, Trivalve, Phar Lap, Ammon Ra, Peter Pan, Hall Mark, Nuffield, Reading, Carbon Copy, Tulloch, Royal Sovereign, Prince Grant, Imagele, and Taras Bulba.

The scope of this website is to cover the history of the Australian Jockey Club Derby from its first tentative inception in 1861 (albeit in a different guise) through to its refinement and reincarnation in 1865 as the Australian Derby Stakes.  I shall cover every A.J.C. Derby thenceforth and conclude my narrative with the last springtime running of the race in 1977.  The historic decision of the Australian Jockey Club to then transfer the event from the spring to the autumn necessarily changed the character of, and my interest in, the race.  There is something about the pulse of youth in the burgeoning spring – whether man or horse – when anything seems possible.  Autumn is different.  Each chapter will sketch a brief profile of the winner; his or her breeding; and the men associated with the horse be it breeder, owner, trainer or jockey.  The winner of the Derby will not necessarily be the primary focus of every chapter.  There are some years (1903, 1943 and 1944 come to mind) when the attention will be on one of the other runners in the race because he or she proves the more interesting subject.

How well I remember my first visit to the racecourse.  I was a toddler when I went with my Dad and older brother to Rosehill in 1957 to watch Tulloch win the Guineas.  My memories of the day are flickering and hazy, like one of those old Movietone newsreels shown at the State Theatre in the fifties.  There were other visits to other racecourses, but it wasn’t until Sydney Cup Day in 1966 in company with my Dad that I first set foot on Randwick and experienced its grandeur and its glory.  That splendid theatre where both the comedy and the tragedy of the human heart have played themselves out so often down the years.  It wasn’t exactly secret men’s business, but being there with Dad, it appealed as such a grown-up thing to do!  The place had a language and culture all of its own and conspiracy seemed to hang in the air. The Derby hero of the previous spring, Prince Grant, won the Cup that day in the hands of the peerless George Moore.  I loved the atmosphere then, I love it still, despite the best efforts of some feckless racing administrators in the years since to trash the very traditions that made Randwick Racecourse so special. 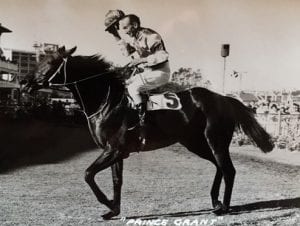 In 1966, Randwick was still a place of pomp and circumstance, a rich palette of colours and extravagant pageantry.  The grandstand flags fluttering and snapping in the breeze; the musical band striking up a tune on the concourse; the shimmering of jockeys’ silks in the saddling paddock awaiting the order to ‘mount up’; the call to the post of the race-day bugler, resplendent in red jacket and black top hat as his trumpet blasts punctuated the air; the autumn foliage – a wonder of russet, crimson and gold.  The thoroughbreds dancing on the greensward, their coats rubbed and curried to the sheen of satin; amidst gardens of salvia, foxglove, primula, and pansies – explosions of red, white, blue, yellow and purple.  I remember the ladies, particularly the ladies, perfumed and pomaded, and the elegance and glamour of the fashions on the field. Oh! And of course, the hats, those extravagant hats!

There was even the faint whiff of the luxurious mystery of the cigar divan and the noisy clatter of the oyster bar.  I was intrigued by the hoisting of the various coloured flags on the semaphore pole: red – winner weighed in all right; green – protest entered; red over green – protest dismissed; white over green – protest upheld.  I can remember gazing down the list in the racebook of past place-getters in the All Aged Stakes and the Sydney Cup and dreaming about races I’d never seen.  I remember the cultured and mellifluous tones of the course broadcaster, Geoff Mahoney, wafting across the racecourse.  I was too young to bet in those days, and I remember only too well the detritus of losing bookmakers’ betting tickets, as Dad and I walked off the course after the last, with the setting sun bruising the distant clouds with a purple tinge.  I knew I’d be back.  I just didn’t realise how often.

So, what qualifications do I have to write such a chronicle?  None!  And, I might add, Dr Samuel Johnson once famously pronounced that no man but a blockhead ever wrote except for money.  Be that as it may, I’ve always wanted to write a history of the A.J.C. Derby and I would argue that my qualifications are as good as anyone else’s.  In truth, I am but a poor punter who struts and frets his hour upon the racecourse and then is heard no more.  Well, at least heard no more with the singular exception of this ‘Kings of the Turf’ website.  And, with due apologies to the Bard, hopefully not as a tale, told by an idiot full of sound and fury and signifying nothing.  Rather, a tale told by a devotee, which opens a portal to the past, a platform to more fully study the men and horses that have graced the Randwick Turf down through the years.

And make no mistake.  The ‘Kings’ in the title refers just as much to the men that owned, trained, and rode those horses contending for the Derby prize, as it does to the horses themselves.  When I set out on this journey, it was to gain a greater understanding of the character of the men, and the quality of the horses, that made the Derby.  In this age of equality: “What of the Queens of the Turf?”, I hear you ask.  Too few, too few to mention – is my response.  In all of those years from 1861 through to the final springtime running of the Derby in 1977, only three fillies ever won the race, and not one winner was ever trained by a woman, officially or unofficially.  So, this is a book overwhelmingly about the male of the species, whether it be man or horse.

Of the vast majority of those men mentioned above, let alone those referred to in the following pages and not mentioned above, very little has been previously written in either racing biographies or histories.  In many cases, I didn’t even know what many of the men and horses looked like.  When I first started to write this chronicle, studying old newspapers meant going to the State Library of N.S.W. and accessing the actual original publication.  Over time this changed to microfilm and microfiche but still required a physical visit to Macquarie St.  Now, of course, with the wonders of Trove, most of the old newspapers are available at the touch of a button on a computer screen, without even the bother of having to leave your own living room or office.

However, when I now read these pages of ‘Kings of the Turf’, my mind goes back twenty years and more to those first, tentative days when I began this project.  As I sat amidst the silence of the stone walls of the Mitchell Library, opposite the Royal Botanical Gardens, and read those dry, yellowing and faded extracts of newspapers, remnants of a vanished age, the sporting world of which they were a part seemed to take shape before my very eyes.  A venerable air of antiquity seemed to rise from them like the fumes from an alchemist’s Alembic, and I was transported back in time to an almost forgotten past.  I can remember often quitting the library precinct and almost expecting to see horse and buggy teams passing Shakespeare Place as I emerged into the blaze of sunlight.  Perhaps you, too, may catch some faint echo or a flitting glimpse of that past as you read these pages and study some of the old photographs reproduced from the newspapers of the time.

Finally, permit me to say thanks to quite a few of those that feature in this chronicle.  Horses don’t talk, but people do, and some of you have helped me down the years in putting this story together.   There are too many of you to name, and sadly, some have even departed the racecourse, but you know who you are, and what you have done to help bring these pages to life.  There is a generosity of spirit about racing people that seems altogether disproportionate to the general community as a whole.  Why is it so?  Perhaps it is the fact that the racecourse is one long lesson in humility – whether as a breeder, owner, trainer, jockey, strapper or punter.  At the track, losing days are far more numerous than winning ones, but it is that eternal optimism of the Wilkins Micawber in us all that guarantees we back up after our previous start, something that the horses we bet on don’t always do. Anyway, enough of my wellspring of nostalgia.  Why not climb aboard for the ride?  I’ll be steering my pen on the snaffle, and I can promise that there will be nothing soft about its mouth.  And entre nous, together, I’m sure we’ll get the trip.

This site uses Akismet to reduce spam. Learn how your comment data is processed.